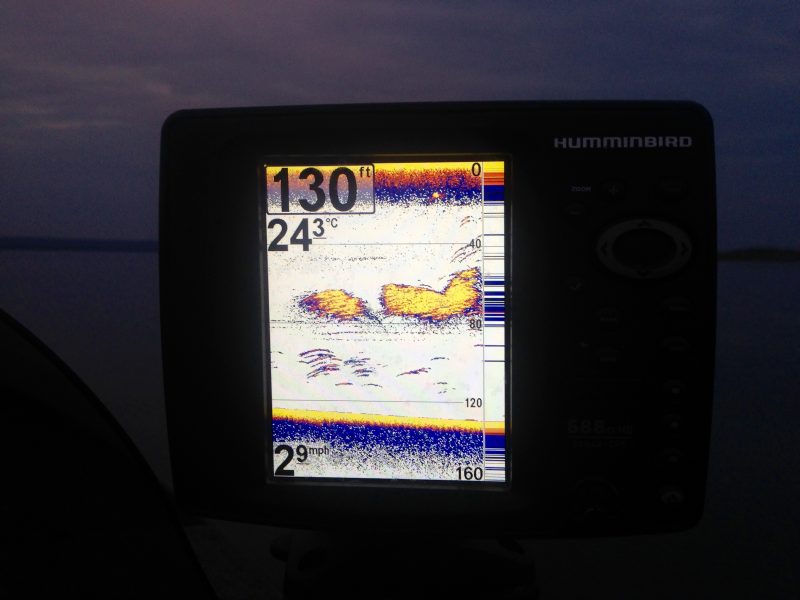 Reports have trickled in that people are catching fish again today, some very nice fish came into Little Current, a 19 lb and 18lb, one from the Wabano Channel and one from West Bay. These are not the first fish from these areas over the last week. West Bay has constantly produced nice fish all through the classic (just nothing huge).

Years ago the Wabano was a salmon mecca, but after the salmon depletion not many have been taken from there. I know of people fishing out at Heywood Island that are catching salmon again there as well, it has been years since people have had a steady catch from those waters, nothing huge but still nice fish.

So why not Wabano i asked myself?

I had every intention of fishing Meldrum Bay today but work and the salmon classic would not permit it. I talked myself into the Wabano. We were out and set up by 5:30 pm, pulling a chicken wing and a watermelon at 75′ and 65′ respectively. Ten minutes into the troll the chicken wing screamed to life and we had ourselves a nice chrome football at 7 lbs. Then for the next 3 hours the big ZERO. I was marking a few fish deep but generally nothing at all, i was starting to regret my choice of the Wabano.

As the sun touched the horizon it was like someone flipped a switch and i was transported back to 1986. I marked a nice sized school of bait 80′ down, i thought okay, i am going to circle back and find them again. No need to circle back, another bait ball appeared, then another this time much bigger maybe 20 feet deep with marks all around it.

I had found the promised land! The next hour went like this…. drop the line down, wait 30 seconds and then reel back up… take off little fish, rinse and repeat. I could not keep my line down long enough or even get it down to 80′ without having a 2lb shaker tugging away. I marked some huge fish but could not keep the lure down long enough to coax them to hit. I tried everything to keep the shakers off, plugs, paddles, magnums, nothing worked. At 9:30 pm, about an hour into this madness i called it. I had a lot of fun but at the same time i was very frustrated. Some of the fish i was marking were monsters. Below is an image of my graph with fish id on, just for shits and giggles. Keep your lines tight, i will be at Michaels tonight.